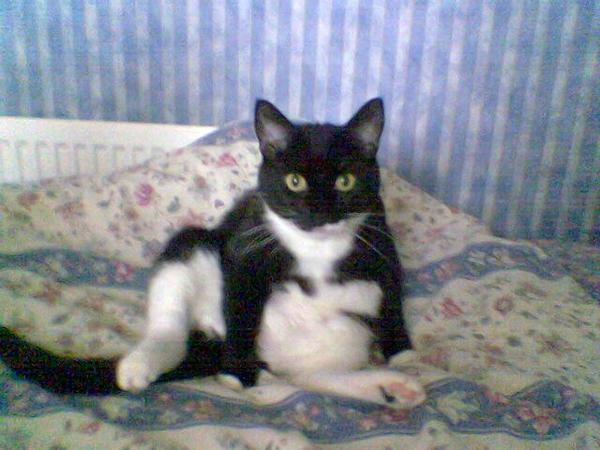 I just said to Orion (Titan’s twin): “Where’s Titan?” He started looking around the room. I think cats grieve, too.

Titan went to the rainbow bridge in November, because he was so ill.. Their beautiful Mum, Scratchy (I didn’t name her!) was put to sleep in September, 2013.

My heart is broken, again. And even when it’s repaired, I know that Orion – who’s 17-and-a- half, will go before too long. It’s hitting so hard, already. I miss Titan the Ticklepuss. I miss his meows. He used to sing the song of his people, right through the night. I nick-named him Pavarotti, because he sang so much.

I love Titan as much as I’ve loved anyone… maybe even more. He was there for me through all my troubles and pain. I knew him before he was born… when he was a squiggle in his Mum’s barrel tummy, and I was there the moment she gave birth to him. And I was there, at the moment he died, when the vet injected him. He was so ill that the anaesthetic killed him, rather than the second injection they were going to give him.

The vet left me with him and I cried my fucking eyes out (not literally). I stroked him and, for the first time ever, he didn’t purr.

Going back a little, I had to get a taxi to the vet, and I put Titan on the back seat, in the carrier case.

The taxi driver said he hoped Titan would get better, then I told him it was his ‘last journey’. He was so sad for us. When we got to the vet, I got my wallet out and he said: “No. This is free. You both take care.”

It was such an enormous gesture of kindness. Humans are good souls. It’s politicians and the media that make us afraid of each other… who make us kill each other.

If only we could be more like cats… present and loving unconditionally, we’d change the world.

“The Curious Incident of the Cat in the Daytime” – That little guy got me into trouble.

(P.S. If anyone has the will and ability to contribute to my ‘fighting fund’… I need carpets… donations would be most welcome through PayPal, at ‘Lesism@btinternet.com’. Anything would be greatly appreciated.)